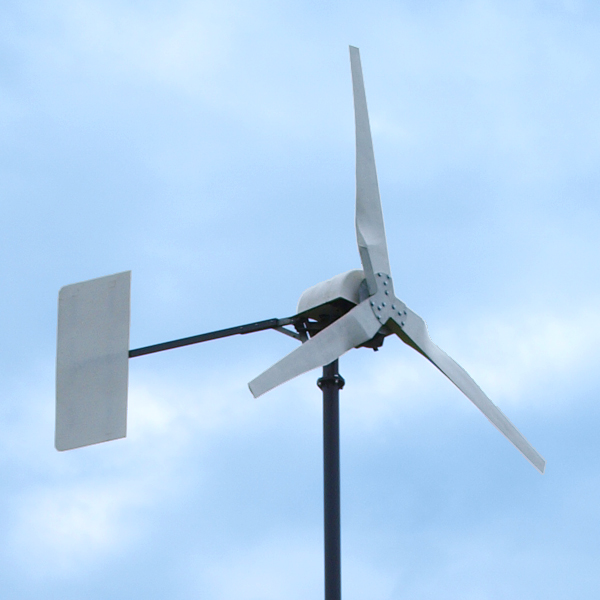 The HevAir 3k is a domestic scale wind turbine suitable for use in homes, farms and light manufacturing applications. It was designed and is manufactured in our manufacturing facility in Crossmolina, Co. Mayo and will handle and survive in the Class 1 wind region that is the West of Ireland.

The HevAir 3k wind turbine can help in reducing your dependency on fossil fuels and with the ever increasing costs associated with buying energy. This neat and rugged wind turbine will quietly and efficiently pump out the power whenever the wind is blowing. Its simple yet sturdy design will insure that throughout its lifetime this wind turbine will perform reliably and give trouble free operation. Install this wind turbine and let it do its work without having to worry about it.

The wind turbine faces itself into the direction of the oncoming wind in normal operation. When the windspeed increases past the rated windspeed the turbine begins to create the angle, this angle becomes greater as the windspeed continues to increase until the angle reaches nearly 90° at which stage the amount of wind power the turbine can capture has been minimised to its rated power.

In a situation where the windspeed is expected to be very high (i.e. a storm) the furling mechanism can be operated manually from the base of the tower so that the angle can be maintained at 90° for the duration of the storm. This introduces an extra safety feature that allows the turbine to protect itself from the destructive winds of a storm.

To compare the way the passive yaw control works to a more common situation imagine standing at the side of a lake and dropping a flat stone vertically. The stone will hit the water and sink. Now imagine throwing that stone at an angle close to horizontal out into the lake. The stone will impact the water and then bounce off the water and continue on. (In Ireland this is called skimming).

The Mean Wind Speed is the average yearly wind speed that occurs at the site location.

The Annual Kwh is the Annual Kilowatt Hours that the wind turbine is expected to produce based on the Mean Wind Speed.

The Mean Power is the average instantaneous power that the turbine produces based on the Mean Wind Speed. This power is different to the power suggested by the power curve as it takes into account the variable nature of the wind (i.e. the wind never blows at a constant speed, it is continuously changing). The power curve shows the power output of the wind turbine under steady wind conditions. 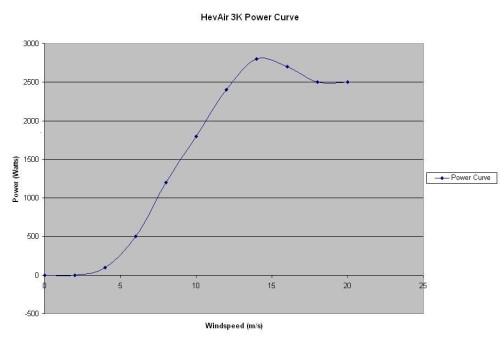